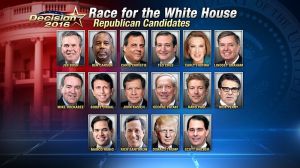 I’ve always had a bit of a penchant for the political process. When I was around six or seven years old, my mother would have to keep me away from the newspaper until her and my father actually got a chance to read it first. I was an ace in history in school and, in particular, politics through the birth and development of the United States. When in college, I studied history and political science (actually had ambitions of becoming a Senator, oddly enough) and, as I have grown older, continue to watch how politics develops or destroys our nation. Thus, when the first debate of the Presidential campaign comes up, I usually watch it with bated breath.

Last night’s Republican Presidential Debate and Down Home Hootenanny (only one part of that may be true) in Cleveland, OH, marked the start of the Political Games this year, but this was something different than anyone has seen before. With 17 people putting their names in the hat for the GOP, they had to come up with some way to keep the field somewhat manageable. Thus, Fox News – the moderators for the first debate – decided to only let the Top Ten players (through an averaging of the top five polls in the country) in the game make the Main Event, while the seven “other” candidates (those in eleventh through seventeenth places) were shuttled off to a “kiddie table” for a discussion held in front of an empty arena and, presumably, darkened television screens.

I tried to watch both, I really did. The first one was interesting as these players – Louisiana Governor Bobby Jindal, former Texas Governor Rick Perry, former New York Governor George Pataki, former Virginia Governor Jim Gilmore, former HP Chief Executive Officer Carly Fiorina, current South Carolina Senator Lindsey Graham and former Pennsylvania Senator Rick Santorum – realized they were all in danger of being eliminated from the Republican Hunger Games and came out swinging. Against what, they weren’t exactly sure, but they were swinging away in the hopes of trying to dig themselves out of this round of the debate and into the “Big Show” for the next GOP meeting. There were two things that I noticed here that were interesting.

Fiorina came off much more knowledgeable about issues than I first gave her credit for. She was able to answer questions solidly and with a measure of decorum that you’d expect out of someone running for the Presidency. If it wasn’t for the factor that her fundraising is so far behind the others that she’ll end up like Michele Bachmann did in 2012 – out after the Iowa primaries – she’d be a credible person to put on the ticket (and there’s still room for her to end up there as the Vice Presidential nominee).

Secondly, I really do despise Graham. It didn’t sound as if Graham wanted to be at this debate at all as he offered monotone responses every time that he opened his mouth. If that weren’t bad enough, every time he answered a question – be it about the current flap over Planned Parenthood, how to get the economy going or a wealth of other issues – he either would swing it towards starting another war in the Middle East (Iran or ISIS, he really doesn’t care) or completely ignore what the moderators were asking in saying, “I don’t want to talk about that, I want to talk about Iran (ISIS),” forever hereon to be known as a “Sarah Palin.”

One of my pet peeves in politics is when anyone (and from any party) doesn’t answer the question that they were asked. I’ve often thought that, in a debate, if a responder strays off the question, they should either A) have their microphone cut off until they return to the subject at hand, B) have someone shove a cattle prod between their shoulder blades until getting back on track (and, if necessary, go to more sensitive areas for repeat offenders), or C) both. I don’t come here to listen to you regurgitate your metaphors or pre-programmed canned responses, I’d like to know what you actually think (if you can). But maybe that’s too much to ask for.

Anyway, the “Happy Hour debate” was better than the Main Event last night. With ten candidates on stage, no one was able to really get any traction other than to demonstrate that they were an upright, walking biped capable of human thought and action. The tete a tete between Kentucky Senator Rand Paul and New Jersey Governor Chris Christie over how far the federal government should go in procuring information in the fight against terrorism got some juices going, but it turned out that was about the only infighting that went on. Paul, in fact, was ignored heavily throughout the two-plus hour debate, something he should have gotten used to from his father Ron’s two tries at the GOP nomination in 2008 and 2012.

Florida Senator Marco Rubio came across as someone that may not quite be ready for prime time but will be a force to be reckoned with in the future. At 44, he was the youngest person on the GOP stage and came across as someone that recognizes the challenges that the country faces in the 21st century and MIGHT have some ideas on how to combat them. Former Florida Governor Jeb Bush didn’t come off one way or another in the debate, something that will probably serve him well until the field starts shrinking and he actually has to narrow his debate style down to a few opponents.

Which leaves us with the buffoon that is Donald Trump. Coming into the debate, Trump was the #1 seed in the event and all he could do was try and knock himself from that pedestal. He was the only one who wouldn’t commit to supporting the GOP nominee in 2016 (unless it was him), berated Fox moderator Megyn Kelly (not one of my favorites but still a respected commentator) through the wee hours of Friday morning and was still complaining on Friday afternoon that he had been unfairly targeted by Fox News and the debate management, coming up just short of saying the Republican National Committee was out to put a screw job on him.

How anyone can even take Trump seriously is beyond me. His first answer that “he doesn’t have time to be PC” should have demonstrated that he doesn’t have the capability to lead this country. While everyone might like to tell Vladimir Putin to go take a flying fuck, to invade the Middle East at the drop of a hat, chest bump the Chinese back to the Ming dynasty and force Mexico on its knees (as Trump had suggested would be good to see former Playboy model Brande Roderick do, as pointed out by Kelly), there’s a little something called international relations and respect that has to be doled out whether you like it or not. International politics isn’t like the good ole boy network of the business world, you sometimes have to handle things a little more delicately than usual.

Furthermore, this entire “don’t have time to be PC” thing has gotten completely out of hand. It is being used WAY too much for people to get away with saying shit that would normally get their faces caved in for saying in general public. You can get your point across without belittling someone else, a nation of people, a race or a segment of society…IF you have a modicum of intelligence, which Trump seems to lack.

There’s still fifteen months until the election for the next President of the United States. As of yet, I haven’t made any decisions on which person is worthy of taking the seat. I am going to have to wait on the GOP side until the pretenders are dropped (that should be by January 2016, I think) and, for the Democrats, it seems they have crowned their choice in Hillary Clinton, not exactly a desirable choice either (can we have an administration that doesn’t have a Bush or a Clinton in it? The last time this happened – other than the last few years of the Obama Administration – was under Jimmy Carter). The next few months – and the debates on both sides of the political equation – will be important for me, and perhaps many others, to decide who their choice will be.