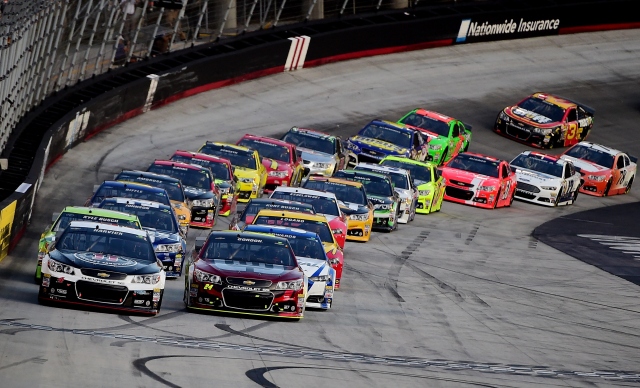 After a week like the one the world has been having, everyone just needs to step off this weekend and let their minds dwell on less testy matters. The start of college basketball season has been a nice salve for me as it is always interesting to watch the next crop of multi-million dollar NBA pros ply their trade…I mean, play for the honor of the school they are attending. Add in the NFL, the NBA and NCAA college football and the plate is pretty full.

I happened to glance at the calendar and realized this weekend is “Championship Weekend” for NASCAR, the venerable stock car racing body in the United States. On Sunday, four men (and we will get to details on them in a moment) – four-time champion Jeff Gordon, defending champion Kevin Harrick, “wild child” Kyle Busch and “steady Eddie” Martin Truex, Jr. – will be eligible to win the NASCAR Sprint Cup championship in the final race of the “Chase for the Sprint Cup (oddly enough, also its final race…a new sponsor takes over in 2016).” Usually I would have been all over this – who doesn’t like a good stock car race? – but, as I have grown older (and NASCAR has made mistakes), it isn’t a priority to me anymore.

One of the problems with NASCAR is that the season lasts WAY too long. Beginning at the start of February with preparations for the Daytona 500, NASCAR only takes about three weeks off between then and almost the end of November, when they conduct the season finale at Homestead-Miami Speedway in Florida. That’s nine months of week-in, week-out events and they all can’t be “edge of your seat” entertainment. There’s more times than not that the product put on the stage is more a solution for insomnia than bringing somebody back to life.

Secondly, there is this manufactured “Chase for the Cup” as a method of determining a champion. About ten years ago, NASCAR thought they needed to add some drama to their method for determining a champion. Some years a driver would win so much that, by the end of the season, said driver had already locked up the championship and made the final race of the season a snooze fest, something that didn’t set well with NASCAR brass from a fan perspective as well as a television (advertisers) perspective.

To counteract this, NASCAR came up with the “Chase.” Using a variety of different point qualifying methods over the years, essentially after 26 races (leaving the final 10 as a “playoffs”) the top ten racers would be separated from the field and deemed the “only” drivers who could win the Sprint Cup. This “playoff” system has been derided by many old school fans of the sport but can be given credit for drawing some eyes towards the battle for the championship over the years (usually after some big crash has caused a fight between the drivers while in the pits).

Thirdly, if you haven’t seen a race on television lately, the reason is that it is harder to find than a virgin in the infield at Talladega. With the current television contract (split between the Fox Television Network and its Fox Sports 1 cable outlet and NBC and their cable side, NBCSN), there are at least four different networks you’d have to search over to find the race. If you don’t have the proper cable package, you might not get NBCSN or Fox Sports 1; that means you’re going to miss some races that have been shuffled off of the major network to these cable sister stations.

Finally, have you looked at attendance at the tracks over the past couple of years? There is hardly anyone in the stands for some of the biggest events on the schedule. It is almost expected that some areas like Kansas, Kentucky or even California might not be able to fill the grandstands (due to location or just plain boring racing), but when such popular racetracks as Talladega and Bristol have empty seats, something is going wrong.

The problems facing NASCAR aren’t exclusive to that sport alone, however (OK, having races somewhere in Kansas might be, but we’ll let that alone for now). Much like the National Football League, with the advent of HDTV and internet services, fans are more likely to stay at home – where they can see pretty much everything going on rather than just when the race screams past them for the umpteenth time – and kick back in their recliner to watch the event. Count in cheaper beverages, not having to pay for a ticket (a family of four could spend as much as $400 to attend one race) and not having to deal with pre- and post-race traffic, it isn’t hard to see why attendance is down and, perhaps, even viewership (due to the television contracts and the different stations).

OK, if you’ve reached this far, you’re probably interested in a prediction on who will win the Ford 400 (look, you have to have a bigger name for your Championship Event than this!) on Sunday. Let’s break the four contenders down in their “Pros and Cons.”

PROS:  This Sunday is the final race in what will eventually be a Hall of Fame career for Gordon. The four-time NASCAR champion would like to go out on top with a fifth championship and there is a sentimentality factor for the fans to send him out that way.

CONS:  For the past few years (he won his last NASCAR championship in 2001), Gordon has been hanging on the edge of the game. Sure, he gets a win once in a while and, for the most part, always was in the Chase for the Cup, but he never was a serious contender. If Gordon was to win the championship, the screams of “FIX!!!” would be heard at racetracks from Fontana to New Hampshire.

PROS:  The defending champion of the series, a likeable character nicknamed “Happy” (once a tongue-in-cheek ode to his temperamental outbursts), Harvick would demonstrate that his 2014 title wasn’t a fluke. He’s been at or near the top of the leaderboard all season long and has won three races over the course of the season.

CONS:  While leagues may like dynasties, NASCAR fans don’t (just ask six-time NASCAR champion Jimmie Johnson, who won five of them in a row). Harvick also rubs some people the wrong way with his attitude towards other drivers, especially when he uses the same tactics. Thoughts are if he hadn’t caused a huge wreck at the end of the November Talladega race, he wouldn’t even have made it to the Round of Eight in the “Chase.”

PROS:  One of the most winning drivers in NASCAR and its different racing series over the past decade. Huge talent that has never been this close to claiming a championship. Has a racing pedigree with his brother, Kurt, also winning a NASCAR Cup title. Won four times over the course of the season.

CONS:  Bratty, arrogant, pompous – these are a few of the kinder adjectives used to describe Busch. All those wins hasn’t exactly bought him a great deal of respect from the fans, either. Missed a great deal of the season after a crash at Daytona in February broke his leg; he needed a waiver from NASCAR (and a bit of hard work on his part) to even make the “Chase” to begin with.

PROS:  The epitome of hard work. A single car team from outside the South (the Furniture Row team Truex drives for is based in Denver, CO), Truex has been able to bring this team to the precipice of the goal of any competitor – being a champion. One of the most popular drivers with both fans and fellow drivers in the garage…don’t think that anyone would begrudge him winning the title.

CONS:  Who? Truex isn’t exactly the fan-favorite like Dale Earnhardt, Jr. and he nor his team have the history of being among the best in stock car racing, a field that is dominated by three or four large teams for the most part (racing teams operated by Hendricks, Gibbs and Childress, for the most part). If he were to win the title and not win on Sunday (the champion will be determined by who finishes the highest amongst these four men in the race), his one win would be the least by a champion since Matt Kenseth in 2003.

I’ll probably tune in for the final 20 laps or so of the race on Sunday, but I certainly won’t be glued to it as I might have been in the past. While the story of Gordon is nice, the story of the “underdog” Truex is a better story, so I’ll be rooting for him. Hey, it isn’t like they won’t be starting the next season in a month or so anyway.