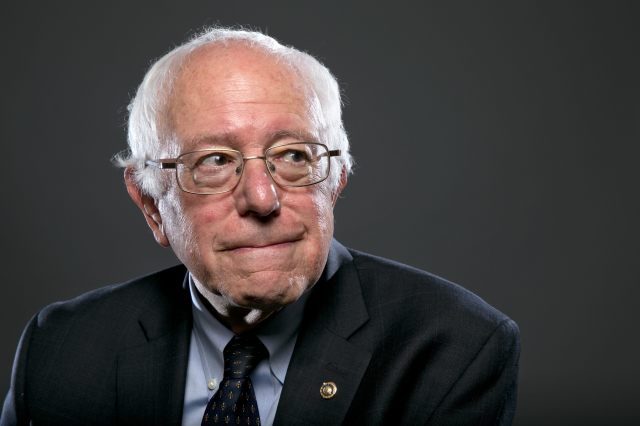 Since the campaign started immediately following the second inauguration of Barack Obama as the 44th President of the United States, it seems that there has been a course. On the GOP side, they rolled out a clown car of buffoons, religious zealots, has beens and never weres and even three civilians, just to give the right seasoning to the idiocy. Now they are down to a representative of each of those categories and I will let you figure out where they go.

On the Democrats side, however, they were supposed to be the adults in the room. They put up a solid policy person in former Secretary of State Hillary Clinton, who seemed as if she were a shoo-in for the nomination, but some challengers arose. Former Maryland governor Martin O’Malley was supposed to represent the “new guard” of the Dems (at the wet-behind-the-ears age of 53), while Vermont Senator Bernie Sanders was to represent the progressive side of the party. On the way to the coronation of Hillary Clinton as the nominee – she did, after all, swallow her pride and take a position in President Obama’s cabinet following his crushing defeat of her in 2008 – a strange thing happened:  the people listened to someone else.

Much like the knuckle draggers who began listening to the rantings of a lunatic on the GOP side (once again, take your pick of lunatic), some on the Democratic side found a message in the anti-Establishment rhetoric of the Independent Senator from Vermont, Sanders. An avowed democratic socialist (definition:  while businesses can run just fine and not under government ownership, heavy taxes WILL be paid by those companies; the money then will fund several social programs that will lift all boats, such as free college and other items), Sanders’ message first alit on the ears of the youth, then on those who were disillusioned with having to look at another Clinton taking a turn in the White House.

Sanders stunned Clinton from the start, battling to a near draw in Iowa before moving onto his backyard in New Hampshire and taking the bellwether state by a large margin. Clinton regained her footing by romping through the South in early March, but Sanders hasn’t gone anywhere. Of the 33 primaries or caucuses that have been held to this date (with the delegate-rich state of New York up for grabs on Tuesday), Sanders has won 16 of them, primarily states with large white demographics and large college towns that will probably be Republican states come November (Oklahoma, Kansas, Nebraska, etc.).

Sanders’ performance has not only driven out every other candidate in the Democratic race (O’Malley at least made it to the first primary in Iowa before dropping out; Lincoln Chafee, Jim Webb and Lawrence Lessig didn’t even make it that far), he’s getting the attention of many in the Democratic Party. Noted director Spike Lee led a pro-Sanders campaign ad that featured such fellow Hollywood celebrities as Rosario Dawson, Susan Sarandon and Dr. Cornell West and other celebrities such as Danny DeVito, Sarah Silverman and Mark Ruffalo (the Hulk in the Avenger movies as well as a two-time Academy Award nominee) have also come out in support of Sanders’ campaign.

But as the campaign has gone along, Sanders has been the victim of the political system. For the first time in ages, the Democratic usage of superdelegates may have an impact on the outcome of the primary. While only behind Clinton by a bit more than 200 elected delegates – those that are allotted by the results of the primaries – Sanders is vastly behind Clinton in the pledged superdelegates that the party uses as a final check on the results of the primaries. Of those pledged superdelegates, Sanders has earned 31; Clinton has picked up 469. Thus, when some news outlets post the delegate count, they show it as a rout for Clinton, 1758-1076, without pointing out that the superdelegates are a huge factor in that count. 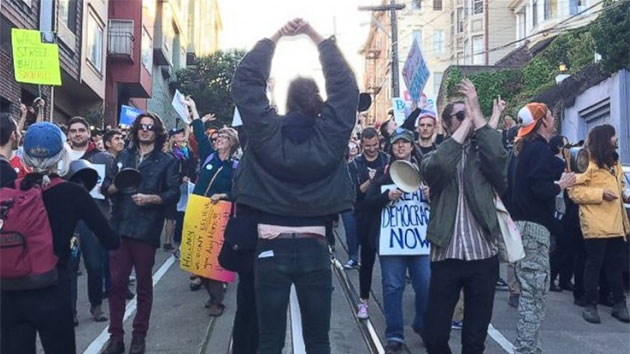 Once again much like the StormTrumpers of a particular candidate in the GOP race, the Sanders forces have been responding in similar manners. During a fundraiser held by actor George Clooney and his wife, Amal, for Democratic candidates in San Francisco on Friday night, Sanders supporters protested the fundraiser and Clinton, refusing to look at the work that the fundraiser was doing for “down the ballot” candidates in the upcoming races (of the nearly $350,000 raised, approximately $300,000 of it was to go to the Democratic National Committee and candidates from the Democratic Party in several states; Sanders has done little to no campaigning for fellow Democrats in their races). Hurling insults at Clinton’s motorcade and carrying derogatory signs, the Sanders supporters seemed to lack the knowledge of what the Clooneys have done for people, if anything else.

Then there’s the tactics that are straight out of Roger Stone’s handbook (if you’re in a cave, Roger Stone is the GOP “strategist” who works with Drumpf). According to many superdelegates, phone calls as late as 2AM have been made by Sanders supporters to their homes. Many of these persons who have issues with the superdelegate process have taken to populating websites and databases such as those called the “Superdelegate Hitlist” (perhaps noting the murderous tone, it now is the “Superdelegate List”). Those that venture online and attempt logical discussion with Sanders supporters on the Democratic process are often met with a literal wall of non-discourse and, when discussion is taken to the nth degree, commentary that seems as if it has come from a StormTrumper themselves.

The battle between Sanders and Clinton has had moments when it has been an excellent exchange of ideas and viewpoints as to the future of the Democratic Party and perhaps even the United States itself. Lately, however, the civility that the two candidates have carried has been fraying a bit, perhaps because they’ve been at this for several months and there’s still a long time until the convention in July. What the candidates – and what their supporters – have to remember, however, is that they are all on the same side.

Unlike the train wreck that is occurring before our eyes on the GOP tracks, the Democrats have two excellent choices. While neither is perfect, either one presents a logical and practical future for the United States in both domestic and foreign policy. Clinton’s vision is one of pragmatism and hard work; Sanders’ is one of bold steps that would alter many aspects of life in these United States. But with either one, the option is better than what is slobberingly gazing from the opposite side.

Over the past few months, we’ve seen a U. S. Senate who will not even consider doing their jobs – the work of leading the country – over confirming a nominee for Associate Justice on the Supreme Court of the United States. We’ve seen several states enact draconian legislation against LGBT persons, knocking them down to second-class citizens because of a “religious freedom” to be as fucking bigoted as they can be. We’ve also seen one candidate on the GOP side freely admit that the U. S. should be led as a “Christian nation,” despite the fact the Constitution that he seems to so lovingly want to follow says that something such as that should NEVER be done. Do you really want three or four SCOTUS seats, more “religious freedom” bullshit and other social doctrines attacked by whomever comes out of the GOP coven? 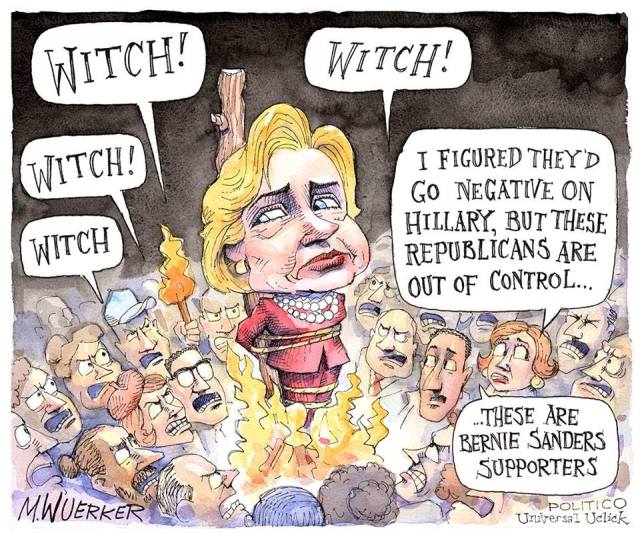 Look, Sanders supporters, I get it. You’re tired of the same old politics and want a change. Through his very candidacy, Sanders has garnered the attention for those changes. But if his supporters continue to call those that support Clinton “Democratic whores,” it’s going to be a bit difficult to be able to keep him in the mix or potentially even consider some of those ideas he has so powerfully presented so far.

The ability to look at things logically and, if the facts demonstrate that the fight is truly unwinnable, to be able to accept whatever prize can be gained from the battle is one of the measures of compromise that this nation is built on. To either downgrade Clinton or pout in your rooms and not vote if “your guy” doesn’t win is juvenile at best. Look logically at the situation and hopefully the skies will clear…if you don’t want Iran in the Western Hemisphere as a theocratic government for the U. S., the only way to go is with the eventual Democratic nominee, whoever it is.