Over the time I took my month-long break, the real reason became evident to me. After the Indiana primary, billionaire charlatan Donald Drumpf became the “presumptive” (and there’s a reason that is in parenthesis) nominee for the Republican Party and my brain basically shut down to be able to comprehend how 13 million people could be that idiotic. After violating every common decency of politics – remember his rant against Megyn Kelly, the “bimbo?” How about his damnation of former Prisoner of War and current Arizona Senator John McCain? (I’d go on, but you get the idea) – the GOP could not put someone up that could defeat a misogynistic, xenophobic fascist and serial bankruptcy whore (who also enjoys not paying his employees yet claims to be running for “the little man”) whose very ideas for “Making ‘Merica Grate Again” (intentional) is to round up 11 million people he views as “illegal,” keeping everyone from entering the United States that comes from a country that has “terrorist activities” (news flash, asshole…that’s pretty much every country in the world) and building a wall (for about $25 billion) that he has no clue how to pay for (you think Mexico’s paying for it? You’re a fool…). It seemed impossible that a party that once had such leaders as Abraham Lincoln, Dwight Eisenhower and even Ronald Reagan could sink to such depths.

Alas, the GOP did. As the last month has gone on – and Drumpf’s statements get more outlandish – Republicans have been doing gyrations on how to balance their “support” for the Orangutan Mutant while at the same time being able to distance themselves from him. Some, such as Senators Patrick Toomey of Pennsylvania and Kelly Ayotte of New Hampshire, will basically break into a run to get away from reporters seeking their opinions on something Mr. Oompah Loompah has said. Others, such as Senator Dan Coats of Indiana, can’t even come up with a policy position that they AGREE with Drumpf. Even the leadership of the GOP, Senate Majority Leader Mitch McConnell and Speaker of the House Paul Ryan, cannot triangulate their “support” of Trump with the gibberish that spurts out of his pie hole. It has actually gotten to the point where McConnell says at the start of interviews, “I’m not going to be commenting on the presidential candidates today.”

During a rally in Atlanta on Wednesday, Duh Donald gave the Republicans every reason to toss him into the street. In his diatribe at the rally, Il Duce Donald basically said “get behind me or I’ll do it by myself.” He said that the current leaders of the GOP should just “be quiet,” else he plans to “go it alone.” “A lot of people thought I should do that anyway, but I’ll just do it very nicely by myself,” Trump said, though he did not elaborate on what doing it “by myself” would mean.

GOP! You’ve got your off-ramp! 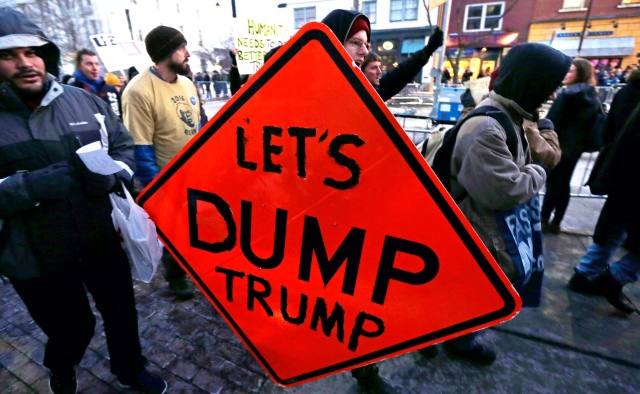 Now is the time that the GOP ought to look at the Orangutan Mutant and state, “OK, asshole. Run on your own. You’ve shown no interest in helping this party – hell, you continue to denigrate it with every word you utter – and, in fact, are threatening our hold on the Congress, the Senate especially and a large lead in the House. There’s the door, Little Donnie…and don’t let it hit you in the ass on the way out!”

Every time that Drumpf opens his mouth, the Republicans have to go on the defensive about what he says. Take, for example, his verbal sewage over Federal Court Judge Gonzalo Curiel. Curiel, the judge of record in the California fraud case regarding the vilified criminal activity that was Trump University, was basically lambasted by Drumpf over several days. The unbelievable lengths that the Cheeto from Queens took against the judge – stating that him “being Mexican” (despite the judge being a U. S. born citizen) biased him in the case, that a Muslim couldn’t hear the case either because of Drumpf’s idiotic statements – had the entirety of the GOP backpedaling faster than Aqib Talib against a wide receiver. They have to do this instead of pushing their agenda and, if they are able to dump Drumpf, then they could actually get about presenting their ideas than Drumpf’s Fantasyland of Delusion. (We won’t even get into how bullying Drumpf’s BS was as Curiel, as a judge, cannot comment on cases he is hearing or what someone says about him…that is the textbook definition of “bully,” much like Drumpf’s statements were the textbook definition of “racist.”)

When it comes to the Republican National Convention next month in Cleveland, Ryan needs to step to the dais and say, “The delegates have been released from being bound to the candidate of their state’s selection. We are doing this due to the fact that the person who earned the most votes is unfit to be a candidate, let alone to be President. We also have to make sure that the tradition and honor of the Republican Party survives…with the person who received the most votes, we cannot do that.” Failing that, the GOP should just designate that they will not be nominating a candidate for President in 2016 and instead concentrate on something much more important to the RNC.

34 seats in the Senate are currently up for grabs in the 2016 general election. Currently holding an eight Senator advantage, the Republicans would have to win 21 of them to maintain that lead. According to Cook Political Report’s rundown on June 10, seven of those seats are tossups (six Republican, one Democrat), meaning that their margin of error is basically nil. The GOP cannot have a plague on the ballot like Drumpf and expect their advantage to remain unless they abandon the White House and concentrate on the Senate (and, to a lesser degree due to gerrymandering, the House).

If the leadership of the GOP doesn’t do this, then they threaten to bring about the extinction of the Republican Party. Once considered the “statesman emeritus” of the GOP, even former Speaker of the House Newt Gingrich has succumbed to the sickness that the Orangutan Mutant has inflicted on the organization. In an interview with “Fox and Friends” on Monday, Gingrich – one of the more respected members of the GOP (for some reason) – stated that a new “House Un-American Activities Committee” be created.

Now, for those of you without a history background, the group that Gingrich speaks of was initially founded to go after Nazis in the U. S. Once World War II was over, the committee then moved onto Communism, calling into question the patriotism of virtually everyone in the county. President Harry Truman denounced the committee in 1959, citing it as the “most un-American thing in the country today.” But it wasn’t until 1975 that the “Internal Security Committee” (as the HUAC had been renamed in 1969) was disbanded.

For a former member of Congress to promote the reinstatement of one of the vilest committee’s in the history of Congress – one that ruined lives with no evidence and that could censor anything it felt was “subversive” – it is just a further statement of how far down the rabbit hole the GOP has gone. It has all been because of their presumed nominee, Herr Drumpf, who has repeated the vilest things that can be stated by a presumed member of the human race. The GOP has the opportunity to distance themselves from him – either through not nominating him, nominating another candidate or “sitting out” 2016 – but the question remains whether they have the spine to do it or not. Since they cannot seem to be able to separate being a U. S. citizen from being the member of a political party, the question is a viable one.