Since January 20 of this year – hell, since the start of the 2016 Presidential campaign in what seems like eons ago but was only about two years back – the people of the States of America have been subjected to a macabre three-ring circus that is the Confederacy of Dunces united under Orange Foolius. Like a drunken clown with Tourette’s, the SCROTUS (So-Called Ruler of the United States) has veered from one controversy to another, infuriating opponents, supporters, and the entirety of the world as a whole and sometimes at in one statement. With this Mr. Hyde approach, many say that the embarrassment in the White House is distracting the public from some of the more heinous aspects of his Confederacy’s actions.

There is some truth to this. As a friend has pointed out to me several times (and we’ve debated heartily), instead of taking action to relieve Puerto Rico from the devastating effects of Hurricane Maria, the Jackass-in-Chief decided to launch his crusade regarding an issue that had all but died, the protests of former San Francisco 49ers quarterback Colin Kaepernick regarding the treatment of young blacks at the hands of law enforcement and the general inequality that still exists in the country. Continuing a streak of disingenuous behavior that has been a hallmark of his existence, let alone his stint as the SCROTUS, Orange Foolius instead wrongly made the protest about dissing the military, the National Anthem, and the flag, which of course whipped up the knuckle-dragging Neanderthals of his slavering base. This served to distract the public for quite a few days as more than three million Puerto Ricans, without power, food, and potable water, suffered after the storms of Maria had passed.

Now, however, perhaps the carnival is coming to a close.

Yesterday the Vice Chucklehead, the Albino Howler Monkey to the twisted organ grinder that the SCROTUS is, decided he would insert himself into the mix. In a $250,000+ bill to the taxpayers – he came from Los Angeles to Indianapolis (reportedly to see the game, which was honoring future Hall of Famer Peyton Manning’s number retirement into the Colts Ring of Honor), then returned to Los Angeles once his panties got in a twist – Vice Chucklehead saw the 49ers continue the protest that EVERY TEAM in the National Football League is now doing. With his Victoria’s Secret finery firmly twisted in his rectal cavity, he walked out of Lucas Oil Stadium in a snit, purportedly as a part of a plan between him and Orange Foolius.

In the past, there would have been plenty of dithering over the Albino Howler Monkey’s actions. Instead, there has been a blistering rebuttal of his actions and the fabricated plan by him and the SCROTUS to continue pushing the divisive issue. Indianapolis Star sportswriter Gregg Doyle penned a searing takedown of Chucklehead, blasting him for a political grandstanding that even Stevie Wonder could see. CNN pointed out the costs of the charade while NFL players and social media castigated the duo for the futility of their divisiveness.

There are signs that the patience of the people for the BS this administration is dishing out is coming to a head elsewhere. Although he is in the middle of a primary fight that could determine whether he’ll remain in the Senate, Arizona Senator Jeff Flake has issued a tome where he rips the takeover of the Republican Party. Entitled Conscience of a Conservative, Flake repeatedly attacked Orange Foolius, his abrasive, wafer-thin skin attacks on opponents and allies alike and his attempted takeover of the GOP. His fellow Arizonan, Senator John McCain, has also stood against the SCROTUS on several occasions, most notably the health care discussion.

The blasting from inside the party has recently come to head, however. Over the weekend, Tennessee Senator Bob Corker, who will resign his seat and not seek reelection in 2018, was the target of the Twitter screed of a 13-year old girl – oh, wait, that’s the ignoramus who squeaked his way into the most powerful position in the world. In several Tweets, the SCROTUS piled lie upon lie ON AN ALLY HE NEEDS TO PASS FOREIGN POLICY LEGISLATION. These were easily swatted aside by Corker and his aides, who repeatedly pointed out where the SCROTUS was a lying bastard while calling his administration an “adult day care” where someone had “missed a shift.” 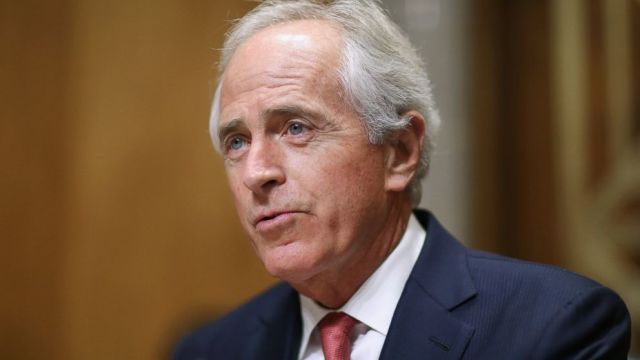 These actions are a noted change from what has preceded. In the past (this writer included), the press and the people have been peering too closely into the abyss, trying to divinate from the tea leaves, the cryptic tweets and the tossed off statements (like the “calm before the storm” comments from SCROTUS last week during a dinner with high-ranking military members) as to what the jackass is intending to do. This isn’t a criticism of the press or the public as this is what we’ve become used to…you know, when we have sane people that were in positions of power and took under consideration what might be in the best interest of the nation rather than just themselves. With the Carnival Barker in charge, however, people may be realizing it’s time that there was a change.

It has SLOWLY become obvious that people aren’t paying as much attention to what SCROTUS says as what’s going on with actions in the Congress and on the foreign policy stage. For example, while Orange Foolius and his Albino Howler Monkey continue the organ grinder ploy in Indy, there has been moves towards nonrenewal of the Iranian nuclear deal, something that the SCROTUS has been advised against by virtually every breathing human in the administration. There is also the Russian investigation ongoing, which is a Paul Manafort or Michael Flynn plea bargain away from finding serious criminal and electoral misconduct by the SCROTUS campaign leading to the 2016 election by special investigator Robert Mueller.

These things…and many others…aren’t escaping the attention of the people. At least those that are on watch.

The filtering of the white noise BS from this supposed head of state is only the start, however. It is time that people across the board – from the media, to those in either party, to worldwide leaders – finally stand up against the stain that is tarnishing what the country is about. Call the SCROTUS on his falsehoods, his lies and his “smoke and mirrors” attempts to divert attention from his complete and total inanity and inability to even act like a human being, let alone the leader of the free world. Call him out on his blatant racism and support for white nationalists, the Nazi Party and the KKK, which he continues with his dog-whistle actions regarding the NFL and his treatment of the Puerto Rican people (compared to Texas and Florida). CALL HIM OUT…the painfully vain, thin-skinned narcissistic bastard wouldn’t be able to handle it.

It is time to start to watch this scumbag, his words, and his actions. The carnival sideshow is over and it is time to hold this person responsible rather than allow him to shift the blame elsewhere (another dubious trait he has). It is time to make sure the “adults in the room” – Chief of Staff John Kelly, Secretary of Defense Jim Mattis, and National Security Advisor H. R. McMaster (Secretary of State Rex Tillerson is a “dead man walking”…he’ll be out in a month) – ride this petulant child and make damn sure he doesn’t make a misstep that would inflict further damage on this country or the world. And it is time to make this SCROTUS act like he either wants to be the leader of the country or pitch him aside, starting with the 2018 midterms.