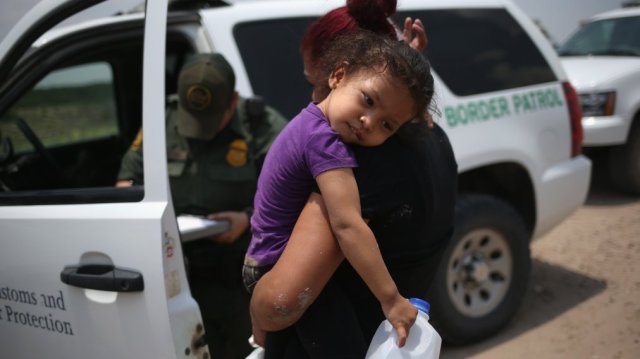 Much has been made over the last few days about the treatment of some of Orange Foolius’ top henchmen/women. Last week, Department of Homeland Security Secretary Kirstjen Nielsen (whose name is SO “’Merican”) was harassed out of a Washington Mexican restaurant. Allegedly the next day, policy advisor and poster boy for the neo-Nazis Stephen Miller was taunted (he probably took it as a compliment) with cries of “fascist” at another Mexican eating establishment. Then on Friday in Tampa, another SCROTUS Succubus, Florida Attorney General Pam Bondi, was harangued out of a screening of a biographical film on PBS’ Mr. Rogers, blonde hair flowing in the breeze as she sprinted to a car and received a police escort because she was “so harassed.”

But it was the treatment of Head Liar and Apologist Sarah Huckster Suckabee that seems to have drawn the most attention. Over the last weekend, Huckster was supposedly waiting to nosh on a tasty cheese plate – you know, while the children ripped from their parents’ arms were sitting perhaps THOUSANDS OF MILES from wherever their parents were – when the owner of the establishment quietly asked her party to leave. According to reports, the wait staff did not feel comfortable serving her – hey, why would some members of the LGBTQ community want to serve an unadulterated liar and bigot on issues that concern them? – and the owner QUIETLY asked Huckster to leave. While she and her party did leave without issue, she then went and whined about it OVER AN OFFICIAL GOVERNMENT ACCOUNT (a violation of law) to get her Orange Points for the week.

The discussion regarding this issue has brought out some real doozies from the conservative factions. Huckster Suckabee started off her Daily Press Briefing on Monday – the first held in a WEEK, mind you, because you can’t explain the logic in ripping families apart when the entire WORLD including Pope Francis, the Methodists, Jewish rabbis, Muslim imams and atheists are against you – by issuing a whimpering Nancy Kerrigan-esque bullshit soliloquy. “We are allowed to disagree, but we should be able to do so freely and without fear of harm. And this goes for all people, regardless of politics.” She then launched into some verbal diarrhea about how the SCROTUS had done so much, earning her Orange Points for THIS week so that she can miss out on her turn in the barrel.

This has been continuous from those on the right for the last few days. Florida Senator Marco Rubio – who actually COMPARED THE SIZE OF HIS DICK TO ORANGE FOOLIUS’ during the 2016 Republican Campaign (what, you don’t remember the “hand size” comment?) – put this beauty out over Twitter:

Liberal harassment of Trump aides & GOP officials will galvanize #GOP base in Nov,but it’s terrible for America. Only matter of time before other side responds in kind. At this rate Putin doesn’t really need to worry too much anymore about sowing division https://t.co/soI0FsUZDT

Now remember, this is the same man who was called “Lil’ Marco” by this scam artist that he now dons knee pads and Chap-Stick for. Who said, “I’d like to punch him in the face.” Who said, “Go ahead and knock the shit out of him, I’ll pay your court costs.” Who had followers in Charlottesville ACTUALLY KILL a woman because they believed in him.

There have also been other SCROTUS sycophants who have echoed those same sentiments, however. And conservatives sounding off on this issue would be fine if it weren’t for one thing:  that ship has already sailed because YOU DID NOTHING ABOUT YOUR SIDE IN THE FIRST PLACE.

Nobody – and yes, let me emphasize that…NOBODY – did a fucking thing about it when Orange Foolius basically wrapped his dick in the flag and screwed Lady Liberty with it. Nobody sounded off when he attacked John McCain or Gold Star families, nobody on the right said anything when he savaged allies abroad, NOBODY SAID SHIT when he attacked other businesses because they DARED to displease him. Now YOU want a side to “be kind,” “be nice,” “turn the other cheek.” You know what that got us last time…KICKED IN THE TEETH.

We all remember back when Michelle Obama stood up on the stage at the 2016 Democratic National Convention and, amid the sanctimonious slathering coming from the rabid dog that became SCROTUS, said “When they go low, we go high! (and after eight years of the bullshit she put up with from right-wingers, that was bold)” And, for the most part, most of the Democratic Party and liberals did adopt that mantra (unless it was simply something so utterly outrageous that it could not be accepted – WHAT THE CONSERVATIVES SHOULD HAVE DONE). Shouldn’t that work BOTH ways, however?

For decades, abortion clinics have been bombed and attacked, with women looking to utilize the services of Planned Parenthood harassed by hordes of religious whackos holding fake fetuses at them. For decades (if not centuries) minorities have been treated like a second-class citizen IF they were lucky. For decades gay couples lacked the rights to even make the critical “life or death” decisions because THEY WEREN’T ACCEPTED as a “married” unit. For decades the Roman Catholic Church has DENIED their “religion” to those who had premarital sex, a divorce or other “abomination” that THEY DETERMINED wasn’t “right.” Then there were these wonderful people:

So now because some right-wing wench who read all the studies of Goebbels and is putting his lessons to work can’t have a cheese platter in a restaurant the left is supposed to kowtow? Sorry, no fucking way.

IF you want to broadcast your support for this administration and the SCROTUS, that’s fine. That’s your right. But you also have the right to be shamed for those actions, especially those that supposedly go against the conservative right’s conviction and “morals” (we established long ago, however, that they don’t have any). You have the right to be informed that you are being a villainous bitch (or bastard) and have to put up with perhaps a crowd that doesn’t like you very much for that stance. It’s the price you pay for BROADCASTING YOUR STANCE.

Now I am sure that there will be some that say, “Well, it’s (their) job.” OK, great. You can quit. If you are seeing injustice occur, you don’t stand on the side and enable it. You don’t go along with it and try to “change it from within.” You can walk away and maintain some semblance of morality to the issue. Here’s the rub, though:  if you continue to be an apologist for the situation, make excuses and “whataboutisms” regarding the subject, you no longer are doing a job. You then become party to what is going on and complicit in the act.

The left has held its tone in check for some time, to be honest. Liberals by definition are on the tip of the spear when it comes to social change, sometimes putting themselves literally in the crosshairs of the “establishment” (re: conservatives), or does Martin Luther King, Jr., or Kent State not ring a bell for anyone? That conservatives are now earning the same derision and scorn that once was reserved for those activists who fought against injustice is simply an evening of the playing field.

After almost 18 months of watching this aberration in D. C. act, I would actually applaud the left for holding back as long as it did. Shame is one of the last vestiges that seems to affect how someone behaves (why else would some conservative sheriff’s make someone walk with signs shaming them for criminal acts?). The problem is that conservatives, along with sacrificing any morality that they once had, has tossed on the trash heap their abilities to be shamed into contrition for their actions.