One of the things that the world of music has gotten hammered on over the past few years is the paucity of female performers, both on the radios and satellites of listeners and in the awards process (Grammys, CMAs, etc.). It is a fair argument too; in country music currently, you have to go down to #11 on the Billboard Country Singles chart to find the first female entry (Carrie Underwood) and, on the Billboard Hot 100, although the first three slots are occupied by women or male/female combos (Lizzo’s “Truth Hurts,” Shawn Mendes & Camilla Caballo with “Senorita” and Billie Eilish’s mopey “Bad Guy”), there are only two other female contributors in the Top 20 (the Ariana Grande/Miley Cyrus/Lana Del Rey collaboration for the reboot of Charlie’s Angels entitled “Don’t Call Me Angel” and Ariana Grande with Social House). With two new releases out from top female artists, you might think that this situation would change, but you’d be surprised. 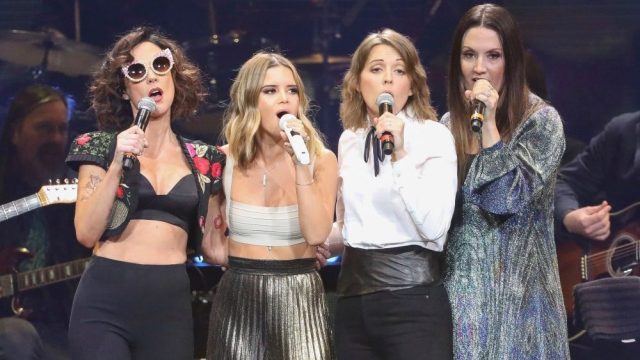 First up is the rather ostentatiously named The Highwomen, who have come out with their eponymous CD Highwomen. The quartet, consisting of Grammy winners Maren Morris, Brandi Carlile and Amanda Shires along with Grammy nominated songwriter Natalie Hemby, are all very accomplished performers and songwriters in their own rights. Coming together for this record, however, they put their egos at the door and come up with an emotional effort that delivers across the board for their purposes as a female country supergroup.

Let’s get one thing out of the way first, however: they probably should have called themselves something other than “The Highwomen.” That name harkens back to the 80s when four of the titans of country music – the late Johnny Cash and Waylon Jennings, Kris Kristofferson and Willie Nelson – joined forces as “The Highwaymen,” a country supergroup that brought each man commercial and critical success. By branding themselves as “The Highwomen,” it seems that Morris, Carlile and Company are equivocating themselves as equal to the legendary male artists who made the name famous (plus they’re putting a HUGE target on themselves). Even Dolly Parton, Emmylou Harris and Linda Ronstadt – the closest thing there was to a female “Highwaymen” previously – didn’t have the audacity to call themselves “The Highwomen.”

If you can get by the quartet calling themselves “The Highwomen,” you’re going to find a very solid outing from the artists involved. Of course, they have to start off the album with their version of The Highwaymen’s “Highwayman,” and it is naturally called “Highwomen.” It follows the pattern that was set by Cash, Nelson, et. al., with a call-and-response song about repressed women in history. A woman subjected to and executed during the Salem Witch Trials; a Freedom Rider murdered in the South; and (poignantly starting the song) a refugee from Honduras who took the long walk to try to seek asylum with her family in the U. S before dying on the trek. It is an excellent update from the male oriented original and starts a very emotional trek that runs through the album.

“We are the Highwomen,
Singing stories still untold.
We carry the sons you can only hold.
We are the daughters of the silent generation,
You send our hearts to die alone in foreign nations,
And they return to us as tiny drops of rain
But we will still remain…”

Going deeper in the album there are some jewels for the listeners. Perhaps for the first time ever, there is a lesbian “kiss off” song called “If She Ever Leaves Me” that tries to subtly tell a cowboy that the woman he’s looking at picking up – Carlile’s secret lesbian lover – “thinks your cologne’s too strong, she’s into perfume” and that he has absolutely no shot. Another song that is noteworthy is “My Only Child,” a song from a mother to her child about why she didn’t have any more children for her child to play with.

The songs aren’t long on Highwomen, roughly three minutes in length for the 12 songs on the record, but each one packs an emotional punch that doesn’t get displayed often in music. If you’re a fan of the women in the group – or you just want to hear some damn good country (or maybe “Americana”) music – you’d be well advised to pick up the record.

In her over 30-year career, Sheryl Crow has pretty much done it all. Originally a music teacher, Crow would in 1987 become a backup singer for Michael Jackson on his Bad tour. She would eventually find success as a solo artist through her debut album Tuesday Night Music Club in 1994. Now, more than 25 years later (Rock & Roll Hall of Fame, are you listening?), it looks as though Crow is calling it a close for her album recording career with her CD Threads.

Why does it seem like the Missouri songbird is ending her recording career? Because it seems that she brought everyone and their brother out to play with her on the album! Both Morris and Carlile from The Highwomen make appearances with Crow and they rank as the MINOR players on the record. Artists such as Stevie Nicks, Bonnie Raitt, Mavis Staples, Eric Clapton, Gary Clark, Jr., Keith Richards, Willie Nelson, Joe Walsh, St. Vincent, James Taylor and Emmylou Harris all add their prodigious talents to the record, making it for a stellar outing. Let’s put it this way: if this is the way that Crow wants to bid adieu to her recording career, she’s done a hell of a job.

There are several highlights on the record. “Prove You Wrong” with Crow harmonizing with Nicks and Morris, starts the record with a bang that sets the ever-increasing standard for the rest of the record. “Beware of Darkness” is an ode about falling too far down “the rabbit hole” and letting everyday news bring us down, brought to life by the guitar work of Clapton and the vocals of Sting and Carlile.

It is a couple of collaborations you don’t expect that seem to steal the record, though. First is a stunning “Redemption Day,” a duet with the late Johnny Cash. The collaboration took a version of her song that Cash recorded before he passed away and mixed it with her voice, delivering a performance for the ages. From Crow’s lilting voice to the gravely rumble of “The Man in Black,” the song that Crow wrote about the U. S. involvement in Bosnia gains new life in these times. Crow comments in the liner notes that “online trolls say ‘shut up and sing…’ I’d think no one would have the gall to tell Johnny Cash to shut up and sing…he’d probably respond with the famous photo Jim Marshall took of him at San Quentin, the shot taken ‘just for the warden.’”

The other collaboration is surprising in the mixing of genres that comes together. Crow teams up with Public Enemy’s Chuck D, soul singer Andra Day and guitar wizard Clark on “The Story of Everything,” a song that, according to Crow, “was born out of the feeling of frustration with the state of affairs in America…so much hope accompanied our first black President into office, but that hope turned into fear and division.” The foursome power through the song, calling out those who continue to push the divisiveness in the nation today, and they aren’t shy about laying it at a certain politician’s door. Musically the song is evocative, lyrically it is a protest from the people…and a warning that the people better pull their heads out of their asses.

The record could have been called “Sheryl Crow and Friends” because, without the ample assistance from Crow’s pals, the record wouldn’t have been as impactful as it is. Crow’s steady, beautiful mezzo-soprano is accented by each and every performer and she’s smart enough to know when to get out of the way and let her guests do their thing. If it is goodbye to recording for Crow, this is one hell of a way to exit the stage.

Alas, it appears nobody is listening to these artists. The Highwomen are currently ranked #53 on the Billboard Album charts after peaking at #10 two weeks ago, while Crow’s record reached #30 on the Albums chart and #2 on the Country Albums chart before plunging off in a mere two weeks. This is a sad statement on the music industry today, but it is something that REAL music fans will appreciate by supporting these women.