I was settling in at my writing garret last night, ready to go off on a few things. My late night writing sessions (when I’m not writing about work) are a great way to relax and get some thoughts out of the system. The outlandish reactions by conservatives to the decision by Federal Bureau of Investigations director James Comey regarding the Hillary Clinton e-mail fiasco – which ran the gamut from mild bewilderment over the processes of legal decisions to the actual gnashing of teeth and rending of garments, thinking that the entirety of the United States’ structure was crashing to the ground as a result of those same decisions – were where I had planned to go, but I was also considering a few thoughts on Kevin Durant’s move to the Golden State Warriors (Larry Bird would have rather jumped off the Bunker Hill Memorial Bridge than team up with Magic Johnson, just saying) or a general catch-all that I like to do every few months for things that don’t require a full essay. In a pinch, I could always go at Drumpf…much as it is for comedians, he’s a well of inspiration for essayists.

Then I looked at the television… 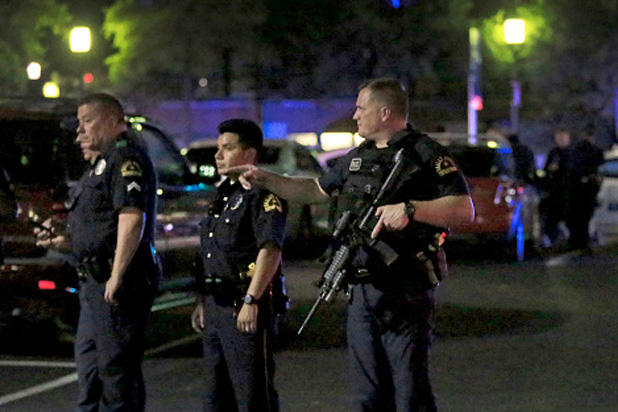 First off, we have to set the stage for the actions last night in Dallas, TX. Earlier this week in Baton Rouge, LA, police responded to a complaint from a citizen that a man with a gun was threatening them outside a convenience store. Police responded to the scene and found Alton Sterling, a 37-year old black male selling CDs outside the convenience store with the owner’s permission. The police approached the man and all Hell broke loose.

Cellphone video from a couple in a car watching the altercation recorded the two police officers – who haven’t been identified at this time – take Sterling to the ground and, per their training, position their bodies on top of Sterling to allow them to further restrain him (it is unknown what was the cause for such action). At one point, one of the officers pulled his weapon, from appearances a .45 automatic or possibly a 9mm handgun, and sticks it in Sterling’s chest. Then there is the comment “gun,” and shots are fired. Sterling died on the scene.

Less than 24 hours later, arguably the more egregious of the two situations occurred. In a suburb of St. Paul, MN, Philando Castile was riding as a passenger in a car with his girlfriend (driving) that was pulled over because the vehicle had a broken taillight. Police approached the vehicle, with Officer Jeronimo Yanez approaching the passenger side and Officer Joseph Kauser the driver’s window. At one point, Castile is alleged to have told the officers that he was a licensed concealed carry permit holder and he was armed at that moment. From there, once again Hell breaks loose.

Castile’s girlfriend alleges that Yanez yelled two commands at Castile, one to keep his hands in view and one to present his licenses and identification. As Castile jerked around to try to obey the officer’s directives – to put his hands on the dash and reach for his wallet – Yanez allegedly opened fire FOUR TIMES (my emphasis), shooting Castile in the right side. Castile’s girlfriend recorded the immediate aftermath and broadcast the incident over Facebook Live, which showed an obviously seriously injured Castile bleeding profusely while the police held the vehicle for almost 10 minutes before any attempt at medical attention could be performed. Castile would die at the hospital roughly a half hour later.

With all that has occurred – or what hasn’t – in the past few years regarding the situation of police use of force, these new situations only cast kerosene on an already raging inferno. Many major metropolitan areas saw protests against such shootings by police on Thursday and, for the most part, many of these protests were peaceable and stayed on point without resorting to violence. Then there was what came on the television late last night from Texas.

Dallas, no stranger to tragedy in its past, saw one of the larger marches wend its way through the city in Dealey Plaza (history buffs might note the location). As the marchers protested peaceably with a large but equally peaceable Dallas Police Department watching them, shots rang out from a parking garage. Within minutes, a peaceful protest turned into a scene of chaos as people ran for cover and the police, the apparent targets of the shooter(s), took cover themselves to return the attack and protect the protestors (no irony here, for those of you waggling your fingers – that’s their fucking job).

As the hours wore on, the news channels all tried to outdo each other with “breaking news” details. The death toll of officers started at three, shrunk to one, went up to four and finally settled on five officers dead and another seven injured. Three people were arrested for taking part in the shooting, while a fourth was killed after a standoff with police in the parking garage from which he allegedly launched his side of the attack.

Now a nation is shocked…SHOCKED, mind you…that such mindless violence has taken over the streets of our major cities. 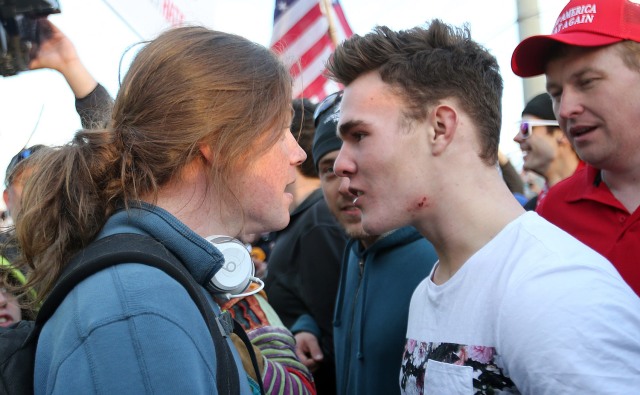 We shouldn’t be. We are part of the reason that it has built up, not one faction or another, one party or the other, one race or the other. WE, the people of this country, have allowed for far too long the vitriol of separatism to infest our very fibers, to infest our thoughts, our speech and our actions. It can be seen across the spectrum, whether it is a simple comment on how much a professional athlete makes for playing a game (the racial animosity in some of the comment sections is a great argument for actual names being used to identify people), our political process (which seems to vilify every action of every person, not imbuing them with even a shred of humanity) or even our interactions with people who are tasked with defending and protecting us (if it wasn’t for the recent shootings, would relations be as strained with law enforcement? I think not…).

But we’re better than this and we’d better start showing it, otherwise there’s not much chance at settling things down.

We can first start with the police. There is an element in law enforcement who gets a Woody because they get to play “cops and robbers” for a living and they exercise that power whenever possible. There are also about 95% of those who just want to get the fuck home at the end of the shift to see their wives and kids. I’ve called for it before:  there should be yearly physical, psychological and financial review of all police officers, stretching even down to their social media usage, to determine that they are stable and suitable for duty. This should be ACROSS THE COUNTRY, from the largest departments to the “one stoplight” towns in rural areas.

Secondly, there should be two tiers of police created. There should be those that are tasked with interaction with the public, be it through traffic patrols (a traffic stop shouldn’t have to break out into a reenactment of the OK Corral), meeting visitors at the police department or other types of situations who would be unarmed. Then there should be a second tier, those who are tasked with taking on situations with active shooters, robberies and other “armed” situations who would be appropriately equipped. This tier of police is able to handle the responsibility that is given to them and act accordingly (I cannot claim original idea on this…a Facebook acquaintance actually proposed it and, to Scott, I say you’re dead on).

We’re not going to overlook the citizens of the United States on this, either. A simple way to start with things is to reemphasize to people that a command from law enforcement personnel isn’t the place to be arguing right and wrong (this is an argument from law enforcement apologists, but it is one that does make sense). If a police officer asks you to show ID, you show ID; if they command you to lie on the ground, get there as quick as possible. Escalation of issues come into play when people want to litigate it on the street corner rather than in a court of law.

Secondly, if the actions in Dallas don’t demonstrate it, it is way beyond time to enact some gun control measures. It is obvious that “concealed carry” isn’t a great idea as the Minnesota man was gunned down DESPITE telling officers he was licensed and carrying. The shooters in Dallas demonstrated great proficiency with rifles at long distances…why do civilians need to have such firepower at their disposal? And before anyone starts screaming “Second Amendment,” note NOWHERE there do I say they should be banned…although others have made that suggestion.

It is time that this country demonstrates what it actually should be – a country that, while a vast assimilation of widely divergent viewpoints exist, can actually work together on issues. This is across the board – politics, law enforcement interaction with the public, even common decency amongst each other – and should be something that we strive to do. We can be better than this, people…the alternative is appealing to no one.