We are now only two weeks from the inauguration of the GOP nominee to the Presidency of this country. Despite all his proclamations and statements that he would “become more presidential,” “Tweet less” and/or “conduct himself like an adult human being instead of a petulant child” (OK, I made that one up), the GOP nominee has shown instead that nothing will change as to his narcissistic, fascist behavior – indeed, it has been displayed more often since he was elected. Meanwhile, while the GOP nominee continues to flex his tiny fingers for his next Tweet, the Kakistocratic Circus has landed in Washington, D. C.

With the start of the New Year, the 115th Congress was seated at the start of this week. But the idiocrats (and, for those of you without a dictionary handy or, if you’re a member of the Republican Party, a working vocabulary, a “kakistocracy” is a government by the least qualified or most unprincipled members of society) in the GOP didn’t bother to wait until they were actually sworn in. On January 2 – the Monday PRIOR to their indoctrination into the Congress – the GOP decided to take away much of the power of the only NONPARTISAN Congressional oversight group in the House, the Office of Congressional Ethics, essentially making them a lapdog of the GOP. This was thwarted by the outrage that IMMEDIATELY set upon Capitol Hill from indignant citizens from across the States of America and, when the vote came up, the movement to enact the changes against the OCE was mysteriously gone.

That has only been the start of the Circus. Those that supported the orange-hued stain on the human condition are only now coming to the realization, “OOPS! We didn’t think this vote through clearly!” The predominance of states that have utilized the Affordable Care Act – “ObamaCare” – seems to be those states that the GOP nominee won. Voters for the GOP nominee now aren’t so enthused about dropping the ACA, especially since it provided most of them for the first time with insurance coverage (it has never been about health CARE, it has always been about health COVERAGE).

That sudden epiphany that the voters for the Orangutan Mutant have had – that their vote for him will take away something that is very intrinsic in their lives – doesn’t even begin to step into such areas as balancing the budget (which they were SOOOO fucking concerned with during the Obama Administration), taking care of Medicaid, Medicare and Social Security (which Speaker of the House Paul Ryan has squarely in his sights), or other areas that might have some impact in their lives (you might think they would have thought about this previous to the election…now you know why they’re called the Ignorati). 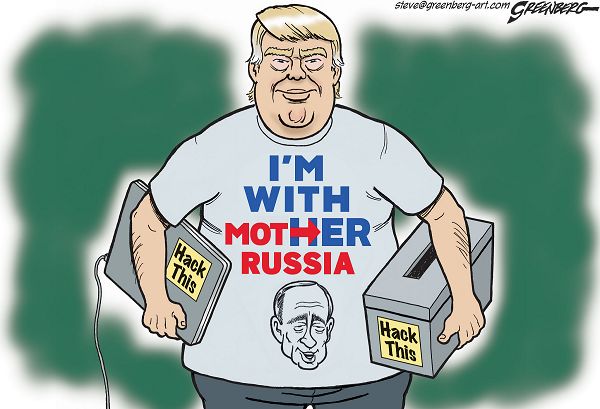 That wasn’t the highlight of the first week of the new Congress – and the incoming arrival of the GOP nominee – and their dual ineptitude. The ongoing reveal of the activity of the Russian government’s intelligence services in the 2016 General Election seemed to unveil new layers to the Onion of Ignorance that the GOP nominee and his party have become. First, he mercilessly bashed many different components of the country – the intelligence services themselves, the current Administration, and several others – siding with Russian dictator president Vladimir Putin, rather than defending the investigations and resulting actions of this very country. By that act alone – and by those that support his statements – the GOP nominee has shown himself to be a treasonous bastard rather than some sort of “patriot” (and the same applies to the Ignorati who support him).

Secondly, in concert with his bootlicking of Putin came his unwavering support of the fugitive (he’s wanted by Swedish police for interrogation over claims of raping two Swedish women) Julian Assange. Assange, the founder of WikiLeaks who has spent the last five years in the Ecuador embassy in London to avoid this investigation, stated that the WikiLeaked documents did not come DIRECTLY from the Russian hackers (note the emphasis there). The GOP nominee used this as “evidence” to suggest that he was correct (the “super-secret information” he alluded to that “no one else had”), despite the fact that, in 2010, he wanted Assange killed for his actions in leaking the information provided by then-PFC Bradley Manning (now Chelsea and now jailed in Leavenworth).

Not to be outdone in the idiocy parade, the rest of the GOP finally got in on the action at the end of the week. Instead of responsibly bringing up each of the nominees for the different Cabinet positions that the GOP nominee has named for individual consideration, the GOP will look to tyrannically push through the nominees by cluster-bombing their nomination hearings. Next Wednesday – not unintended that it will be the same day that the GOP nominee gives his first press conference in OVER TWO MONTHS – SIX different Cabinet nominees will have their hearings in the House.

Why this tactic? The GOP is looking to brush under the carpet not only the inadequacies that every one of these fucking nominees have, they are also looking to minimize the likelihood of the corruption and “other” activities (stock ownership, “pay for play” politics, the factor that you were refused a seat as a federal judge because your OWN PARTY thought you were a racist bastard) dominating the news cycle. It is a cowardly action by a thoroughly disgusting party, plain and simple.

Finally (and without blinking twice), House GOP members enacted a 130-year old bill that could potentially cut federal employees’ pay to $1 an hour. The Holman Rule, named after an Indiana congressman from 1876, was brought back to life by Virginia Representative H. Morgan Griffith and gives any member of Congress the right to propose amending appropriations bills to single out government employees for a pay cut or cut the spending to a particular program. It is a blatant attack on the civil employees who make up the backbone of the federal government and a further demonstration of the scuzziness of the GOP.

All of this goes on while the GOP circle-jerks what they’re going to do with the Affordable Care Act – fuck the fact they have no plan for replacement so that 20 to 30 million people lose their health coverage – and defund Planned Parenthood over abortion, which makes up only 3% of their total activities (with the rest covering such subjects as pregnancy prevention, women’s health tests such as mammograms and education on STDs) and of which ZERO federal dollars go to support (by law). If you want an example of what happens when the proverbial dog catches the car and doesn’t know what the hell to do with it, look at the U. S. government in action.

So, what can the Democrats do about it? Not a goddamn thing. In the next two weeks, this will all become the Kakistocratic Circus’ baby, their ride, and as they drive the Express Train to Hell, we can already hear them screaming about how the Dems won’t work with them. To that I say:  fuck them. That’s what they did for eight years under Obama and it is time to see how that works on the other side. You can only hope that the Kakistocratic Circus doesn’t completely destroy the country this time instead of coming up short as they did in 2008.

And what about those who voted for the Cheeto Jesus? You’re just as culpable as Der Fuhrer is. You can change your mind, however, if you are so intent on “holding him accountable and voting elsewhere if he fails.” If the last goddamn two months aren’t proof of his total ineptitude and inability to be President (the bastard Tweets about Saturday Night Live and their portrayal of him; you know what President Barack Obama is doing? Writing a 50-plus page dissertation on criminal justice reform for the Harvard Law Review, becoming the first President to do so), then you either support the GOP nominee wholeheartedly or you’re a lying bastard that “if he does something wrong, I won’t support him.” It is time you who brought about this nightmare are held accountable.

It’s time that the 60 million or so who voted for the stain on the human condition to admit that they were wrong. Then they can step up and fight this embarrassment to the country on every front alongside those who saw the con job from the start. If they don’t – if they stick with the refrain of “let’s give him a chance” (one that wasn’t afforded Obama, I might add) – then they shall be held as guilty as the incoming administration will be when the bastardization of this country begins. If they can admit they were wrong, we might then begin to reach some sort of détente in the political battles in the States of America.