One of the things I enjoy in my well-rounded life is some great music. There are things that I come across that I simply cannot stand (such as Taylor Swift’s caterwauling…seriously, can someone give the girl a gift certificate to buy a voice?), but when I come across something I find great, I like to tell people about it. As my general preference is for harder edged rock, it will often go in that direction (but not always…).

Of late, there are several bands that I am very high on. Previously I told you about Halestorm and, if you want to get on that train, they should have a new album out towards the end of the year (meanwhile, jump on their ReAniMate 3.0 covers album). Here’s two more that you should be considering: one is a major opener for one of the biggest tours of the summer and the other presenting a different sound, if you will, in the hard rock genre. As always, I don’t claim to be on the band first, but I do think they’ve got some legs to them for the future!

Volbeat is a band out of Denmark that has been a 16-year “overnight success.” Despite having great success in Europe with their mixture of rockabilly, hard rock, and punk – surprisingly, the band rarely embraces a hard-core metal or thrash sound – Volbeat was unable to penetrate the U. S. market to any great extent. That changed with their latest release, Seal the Deal and Let’s Boogie, which debuted in the Billboard Magazine‘s Top Five Albums the week of its release last year. As we speak, Volbeat is joined by Avenged Sevenfold (on some stops) as the warmup acts for the massive Metallica “WorldWired” tour that is hitting stadiums in the U. S. and worldwide.

That they all are considered hard rock acts (Metallica delves into thrash metal and A7X crushes their more metalcore sound) demonstrates the diversity of the hard rock arena. Volbeat, as stated before, aren’t your typical metalheads, incorporating sounds from across the spectrum into their particular brew. On earlier efforts, Volbeat’s sound was more inspired by country music such as Johnny Cash (their effort previous to this, Outlaw Gentlemen and Shady Ladies, had a theme to it that gave you impressions of a Clint Eastwood spaghetti Western). With Seal the Deal, however, Volbeat has a sound more reminiscent of The Offspring than anything else.

The first song on the album, “The Devil’s Bleeding Crown,” was a very strong effort that just didn’t seem to click with U. S. audiences when it was released as a single. It wasn’t until the eponymous title track was released that some success occurred for singer Michael Poulsen, guitarist Rob Caggiano and bassist Kaspar Boye Larsen. “Seal the Deal” was a powerful piece of music that rumbled from the speakers, with the guitars provided by Caggiano being particularly notable. Since then, hard rock radio has been all over “Black Rose,” which may outdo “Seal the Deal” in popularity.

Surprisingly, Volbeat can sound almost melodic with the music they create. Do not be fooled, however, they do have an edginess to their lyrics that can be surprising and, in some songs, imagery of Hell and the Devil are implied. There are tunes about darkness, redemption and “selling the soul” that some might not like. That would be their misfortune, because most of the songs have a finish where, if the protagonist doesn’t emerge on top, they are at least fighting towards the future.

Along with the songs mentioned above, there are a couple other efforts that are noteworthy on Seal the Deal and Let’s Boogie. “The Gates of Babylon” is a very good track from the album, but it is a cover song on the album that is even more surprising because of its quality. Taken from the Georgia Satellites (an 80s outfit that is highly underrated), “Battleship Chains” demonstrates that Volbeat takes their inspiration from a wide assortment of musical genres. The future is going to be fantastic for this band and, with the next couple of years, I can easily see them becoming a huge part of the music scene in the U. S.

Another great foreign act that has been chipping away at the walls in the U. S. (the metaphorical ones, not the ones some idiot wants to put up) is Sweden’s Amaranthe. Another one of those multi-year “overnight sensations,” the band actually started in 2008 and has been pretty much non-stop touring and recording since then. They had a bit of success in 2013 with the song “Drop Dead Cynical” from their Massive Addictive album, but they have found their stride with their latest release, Maximalism.

Pinning Amaranthe down to a “sound” is roughly like trying to give a cougar a bubble bath in a thimble. First off, the band encompasses some elements of EDM but loves to roll out a metal guitar assault to go over the hypnotic background. They can sometimes veer into the realm of “pop” music, which may offend some of those who are more hardcore, but they always seem to be able to bring it back to a more “hard rock” sound when necessary. That may be because of the triumvirate of vocalists that Amaranthe employs. 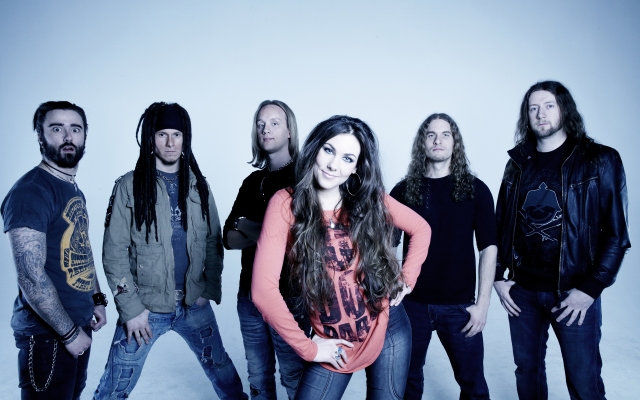 That’s right…three vocalists. First there is Elize Ryd, who gives an ethereal quality to some songs when she’s not rocking out with an unbelievable voice. Ryd gives credibility to the Amaranthe sound whether they are in their more experimental modes or they are driving the guitars down your throat. A nice meshing with Ryd WAS Joacim “Jake E.” Lundberg, who had a voice that harmonized nicely with Ryd as they performed the “clean” vocals (Lundberg, after the release of Maximalism, left the band and was replaced by Nils Molin).

There’s a reason I say “clean” vocals. The third vocal effort on the album is Henrik Englund, who provides the “death growl (a guttural vocal styling where it sounds like the beasts from Hell are emerging from your speakers)” or the “unclean” vocals on the record. While it may sound like it is a complete mess, Amaranthe has been able to put together songs that perfectly accentuate the stylings of each of their singers and, likewise, the other members of the band (Olof Morck on guitars and keyboards, Johan Andreassen on bass and Morten Lowe on drums).

Of particular excellence is “Boomerang,” an effort that would have been perfect on pop radio had it not been for the crushing guitars and Englund’s growling of his lyrics. A song about how someone tries to put another person down – but the person keeps coming back “like a boomerang” – it is an outstanding tune that epitomizes Amaranthe very well. Two other songs, “That Song” and “21” are also excellent, but most surprising is a ballad that demonstrates the abilities of the band quite well.

“Supersonic” is a tune that Englund takes a break from and let’s Ryd and Lundberg exercise their vocal abilities on. Yes, it is a ballad – and everyone usually HATES a metal ballad – but it works for Amaranthe because of the dual vocals (not a duet – each vocalist has a lyrical segment written for them). Using some orchestral instrumentation along with the band’s musicians, it may give some a comparison to Amy Lee and Evanescence, but “Supersonic” soars in its own right and serves as an excellent “palate cleanser” for an outstanding record.

You may not have heard of them yet, but they’ve got the potential – especially with Ryd’s photogenic qualities and the power of the band – to be a breakout act, possibly even on the pop charts (bands always appreciate crossover success, not to mention their record companies). They’ll have to get control of some of their personnel issues – not only from Lundberg’s departure last year, but Englund replaced original “unclean” vocalist Andreas Solveström in 2013 – to fully realize their potential, but if they can record more albums like Maximalism, it will push Amaranthe into the stratosphere of the hard rock/metal world.