If it seems like you’ve stepped into the DeLorean from the movie Back to the Future when you look at the Billboard Album charts, you would be correct. Later this week, Madonna’s new record Madame X will ascend to the top of the charts. Likewise, veteran rocker Bruce Springsteen will be there in the second slot with a collection of western swing and acoustic tunes on his album Western Stars. Finally, the late Prince will make his own appearance as his estate releases his Originals CD, a collection of demos that the Purple One performed and gave to other artists for their own success.

All three of these artists were highly influential on the development of MTV – you know, that channel that used to show music videos before it devolved into a reality show hub of hedonistic and oversexed muscle heads from New Jersey and knocked up teenagers before they head to porn to make a living. And Madge and “The Boss” have been in this position before – in 1985, with her Like a Virgin album taking down his Born in the U.S.A. in February of that year. Since I’ve never had a great affection for Madge, however, we’re going to focus on the two men in this look back in time, Prince and Springsteen, and what they bring to the table.

For better or worse, the late Prince’s estate is continuing to release materials from “The Vault,” which supposedly contained thousands of Prince’s outtakes from studio sessions that either he never felt should be released, that he didn’t consider good enough for release or that he felt he could still work on and improve. Last year, The Prince Estate released Piano and a Microphone 1983, a stark piece of work that showed Prince’s creative process but also highly early drafts of songs he could have made better. Reviews for that were mixed because of these facts and those arguments will be revived for his new CD.

On Originals, The Prince Estate has cobbled together 15 songs that Prince originally wrote and put down on tape, but then did the unexpected. Whether he planned on it (and, with some of the songs, it was planned) or whether it was out of the blue, Prince gave the songs and, perhaps most importantly, the credit for creation to other artists. This is unheard of in the industry; the most valuable right that an artist can have is the songwriting credit, which gives a lifetime of royalties for performance and playback.

The CD begins with two songs that were readily recognizable as Prince songs but were made famous by others. “Sex Shooter” (done in the move Purple Rain by Apollonia 6) and “Jungle Love” (performed OUTSTANDINGLY by Morris Day and the Time in the same film) sound as if they could have come off the movie soundtrack. While “Sex Shooter” sounds more come hither with Apollonia and her backing singers, Prince does give the structure of the song. The same can be said for “Jungle Love,” but it is arguable that Day and Jesse Johnson, the guitarist on the song, provided the swagger that it would eventually earn.

The third song on the CD is arguably the most noteworthy of the songs on the collection and shows how artists collaborate well. “Manic Monday,” which an infatuated Prince gave to Susanna Hoffs of the Bangles, is a powerful piece of pop craftsmanship in the hands of the Purple One. All Hoffs and the Bangles had to do was fill in some blanks, changing some of the piano tracks and adding in the four-part harmonies that they were famous for.

What are the jewels of Originals, however, are the lesser-known tracks. Tunes that were recorded by Vanity 6 (“Make-Up”), Mazarati (“100MPH”) and – believe it or not – Kenny Rogers (“You’re My Love”) could have used a little support from their Creator, but he was happy to just be able to try to help his proteges/friends. And, to finish off the record, the simply amazing recording of his version of the song he would give not only to Sinead O’Connor (and would make her an international superstar) but also to The Family, “Nothing Compares 2 U” closes the album with a smash.

Even though I am an unabashed Prince fan, I STILL feel a sense that we aren’t supposed to be hearing these pieces, however. Much like when Microphone came out last year, it almost seems as if you’re infringing on the private thoughts and noodling of an artist in a creative process, not someone who was laying down a track for the public to hear. On these songs, Prince was giving the framework to the performers who would later make them smashes. He WASN’T doing it for himself and he probably never intended for them to be heard, content in staying in the shadows and allowing his friends to shine on their own.

Does this mean I am going to stop purchasing the new releases when The Prince Estate puts them out? HELL NO! Originals is an outstanding piece of musical history and, arguably, should have been released last year instead of Microphone. It shows that Prince was quite altruistic with his creative output (for whatever reason that may be) and it did help some artists become big and big artists become huge because of his involvement. It also shows that he could have made these songs hits on his own, but he decided they were better in the hands of others – truly a man who knew his boundaries.

Another performer also known for letting other artists make hits out of his songs is Bruce Springsteen. Such artists as Patti Smith and 10,000 Maniacs (“Because the Night”), Manfred Mann’s Earth Band (“Blinded By the Light”), the Pointer Sisters (“Fire”) and even the late Natalie Cole (“Pink Cadillac”) have recorded his songs, entrenching him as one of the great songwriters of our time. But artists are going to have a hard time remaking anything from “The Boss’” most recent work.

Western Stars is a love letter from Springsteen to the “California sound” of music from the 70s that fused country and rock into a softer sound. To be honest, though, it misses the mark in that area. It isn’t an ode to the sounds of Fleetwood Mac, Jackson Browne, the Eagles and Linda Ronstadt; in fact, it’s difficult to determine just WHAT sound Springsteen is going for on the CD.

Springsteen uses way too much orchestration for it to be a “country rock” album in the vein of those 70s artists. But it doesn’t quite reach all the way to country music nor western swing music. There seems to be but one reason for the CD to be in existence…Springsteen’s gravitas as an artist.

It isn’t like Springsteen hasn’t done some off the beaten path material in the past. After the success of The River, people were expecting a massive smash from “The Boss.” Instead, Springsteen gave them a stark, four-track album of acoustic material that was artistically outstanding in Nebraska. He would repeat this style of acoustic music a little more than a decade later on The Ghost of Tom Joad (the title an homage to John Steinbeck’s novel The Grapes of Wrath about the western dust bowls of the 1930s). 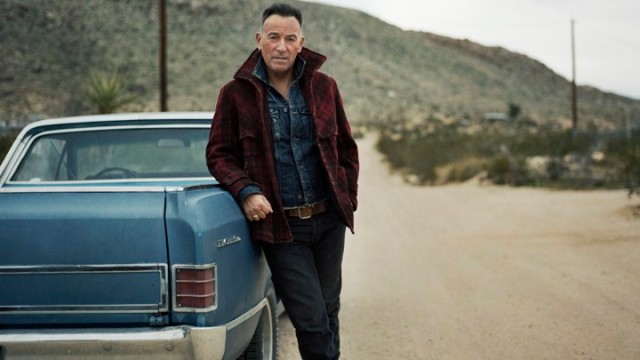 But this effort from Springsteen lacks something. On both Nebraska and Tom Joad, there was a heart and a passion to the music that made it sound like Springsteen was invested in the work. With Western Stars, it sounds like Springsteen is going through the motions, not really putting his all into the music and content to tread the same musical boards he’s walked before.

This isn’t to say that there aren’t some good pieces among the 13 tracks on the CD. “The Wayfarer,” “Drive Fast (The Stuntman)” and “Chasin’ Wild Horses” evoke some of what Springsteen might have been attempting to do with the album. The rest, though, have an overdone quality, especially with the sweeping orchestral arrangements that you never heard on a Jackson Browne or Warren Zevon (another troubadour responsible for the “California sound”) song.

At 69, Springsteen has earned the right to do whatever the fuck he wants to do when it comes to his music. And, if you’re like me, you’ll be there to pick it up when he puts it out for the public. But for those who were looking at Western Stars as an album in the strain of the Eagles or some other stalwart of the “California sound,” you’ll be a bit disappointed.